By today’s standards the SCSI and ATA protocols and interfaces are outdated in large part due to their bandwidth, electronics and software architecture, prohibiting the massively parallel access to data which is now expected with expansion devices like graphics cards and SSDs.

The following section describes the interfaces and protocols that have been developed over the last 18+ years that were designed to overcome the limitations of protocols like SCSI, looking into recent trends to distill how each of the technologies might benefit a TouchDesigner powered server architecture.

A SATA III bus has a maximum throughput of 6 Gb/s (Gigabits) per hard drive. There are 8 bits in a byte so there is a theoretical maximum bandwidth of 600 MBs, which in the real world ends up closer to 550 MBs maximum per drive. 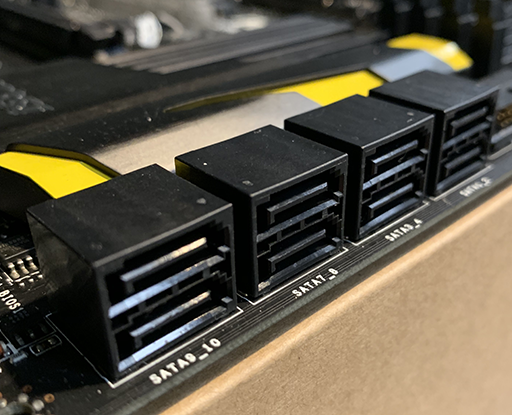 SATA-III is the latest version of SATA and has already been around for over a decade.  SATA-III is the most widely supported bus interface found on today’s motherboards.

The SATA-III interface is supported on a wide range of both SSD and HHD storage media.