RAID technology has been around and evolving for many decades. In a nutshell, RAID is a specification for combining multiple disks in arrays to either increase capacity, speed or redundancy or all 3 together. All three storage communication protocols covered in this document; SATA, SAS and NVMe, support RAID configurations. RAID is very big topic and if you are unfamiliar with this technology please refer to the internet. Wikipedia has very adequate coverage here… 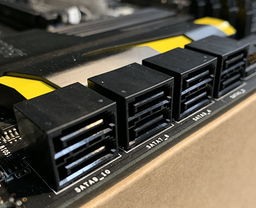 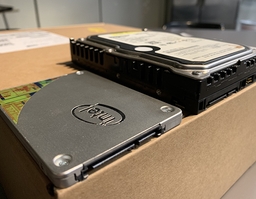 With the popularity of SSD drives exploding it was determined that a new protocol was required to better take advantage of the maximum bandwith of NAND. SATA and even SAS impose bottlenecks that can be avoided by direct communication with the PCI bus. The new specification introduced in 2013 was called the Non-Volatile Memory Host Controller Interface or NVM Express. The express designation is an indication of where it runs - on PCIe. Instead of using the antiquated SATA controller, or slower SAS lane, the much faster PCI Express lane would be leveraged to dramatically increase the bandwidth at which data could flow from the controller to the CPU.

If you want an SSD drive you will have to decide on an interface and form factor. This section will introduce you to the options.

The HHHL formfactor for NVMe drives look much like any other PCI expansion board. These PCI expansion boards can be fitted with respectibly large capacities of NAND and can run at very high speeds, close to the maximum theoretical bandwidth of the PCI bus they are slotted in to. The majority of cards avaiable at the time of writing run in x4 PCI3.0 slots but x8 etc are appearing.

M.2 was designed to serve the same small formfactor of mSATA but overcome the capacity and speed limitations. In most cases it has already become the desired replacement for the mSATA standard because its thinner and can sustain more v-NAND chips. M.2 devices can be connected to SATA ports or directly the to PCI Express 3.0 lanes, completely circumventing the bandwidth limiting SATA protocol.

The M.2 slot is a formfactor for a slot with a hardware connection to the motherboard. It simply defines a connector and a length for device manufacturers to comply with. Motherboards have M.2 slots that work with a variety of technologies and protocols and therefore you will need to distinguish between them and read the motherboard specicifications carefully.

The U.2 interface has been developed to connect SSD drives directly the PCI Express bus. Currently each u.2 interface can work directly on a PCI 3.0 x4 bus for a theoretical maximum bandwidth of 4 GB/s per drive. The advantage of the U.2 Controller is that the port format is based on a wire connection and looks similar to the SAS Controller connector.