The Beat dialog under the Dialogs menu lets you set the beats-per-minute (BPM) of a TouchDesigner project by letting you tap in the beat while you are listening to music. It is used by the Beat CHOP to determine the length of its cycles and its "phase" (when it returns to the start of a loop). 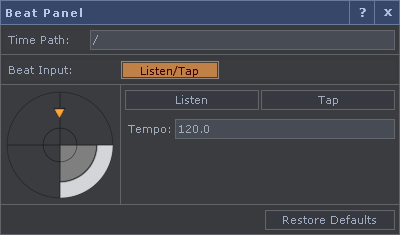 How to set BPM and Phase in Listen/Tap Mode

To set the BPM, first turn on the Listen button. Then press the Tap button EVERY 4 BEATS, preferably at the beginning of each bar. After 10 or 20 seconds, stop pressing the Tab button, and turn off the Listen button. You can see teh BPM has changed, and it will heep that bpm until you change it again.

The Beat Panel will average out your taps to the closest BPM, so you can keep tapping EVERY 4th BEAT to get a more accurate average BPM.

After it drifts, you can resync the beginning of a ramp cycle to the start of a bar of music: With the Listen button off, press the Tap button once. It will re-sync.

The orange triangle on the beat circle lets you adjust the phase up to one cycle in case you want to advance/retard your visual relative to the music.

You can watch the beat cycle, or use the Beat CHOP to generate 0-to-1 ramps based on the beats-per-minute.