Playstation DualShock controllers can be used as input devices for TouchDesigner. 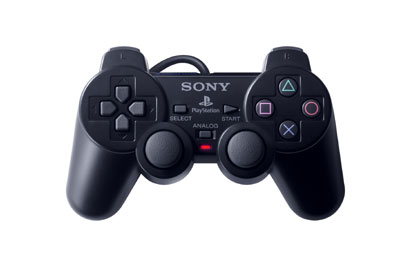 What you'll need for a Playstation3 controller:

The PS3-Windows driver must be selected in the Joystick CHOP's Joystick Source parameter. No motion controls supported at this time.

What you'll need for a Playstation2 controller:

The PS2-USB adaptor must be selected in the Joystick CHOP's Joystick Source parameter.

The image below shows the network of these components. TouchDesigner creates data channels from the controllers through the Joystick CHOP.

The math1 CHOP simply inverts one of the analog sticks for consistency. The rename1 CHOP renames all the channels created by the Joystick CHOP into something more meaningful. You can edit the rename parameters here if you would like to change the naming of any controls (the analog stick and directional pad channels are verbose for clarity, shorter names could be used).

The constant1 and replace1 CHOPs are added so that if the joystick is not present at startup, the channels still will be present in your CHOP network using default values. If you rename your channels in the rename1 CHOP, be sure to update constant1 with your new channel names.

TIP: Make sure the Analog button on the controller is on, the red LED should be on. If not, the analog sticks will not work. 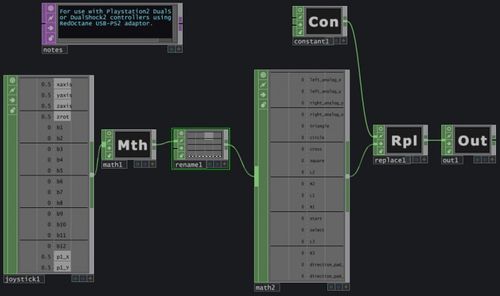