The Pangolin CHOP should work with any version of Beyond but it is recommended to use at least Beyond v5.1.

Beyond must be open to use the Pangolin CHOP. 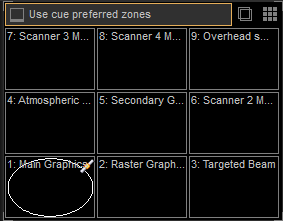 Active active - When disabled, the CHOP will no longer send to Beyond. The corresponding image in Beyond will also be cleared.

CHOP chop - Path to the CHOP. The input CHOP must have x, y channels for the point positions. In addition, it also supports z, r, g, b, and id channels. The id channel is used for grouping points together as a single shape. By default when no id channel is present, each point is separate and unconnected.

Zone zone - The index of the zone to send to in Beyond.

Percent percent - Specify the sample rate as a percent of the projector default sample rate.

Vertex Repeat repeat - How often to repeat each point in the image (not including blanked points).

Resend Image resend - Resend the image to Beyond.

Blackout blackout - Sends a blackout command to Beyond. Has the effect as hitting the "Blackout" button in Beyond.

Extra Information for the Pangolin CHOP can be accessed via an Info CHOP.

The location of an operator within the TouchDesigner environment, for example, /geo1/circle1, a node called circle1 in a component called geo1. The path / is called Root. This path is displayed at the top of every Pane, showing which Component's network you are currently in. To refer instead to a filesystem folder, directory, disk file or http: address, see Folder.