This tutorial is meant as a crash course in Mixxa. It will give you an idea of what Mixxa does, where its main elements are located, and the basics of creating video mixes. Once you've completed this, you can dive into the full details of the Mixxa manual here. This tutorial was written with Mixxa 2015 but still apples.

You should have Windows 10 or later, with a graphics card with 4 Gigabytes of graphics memory. In general Mixxa likes graphics cards with 300 or more NVIDIA GPU cores.

Get the latest Mixxa here.

Un-zip the Mixxa***.zip folder on your desktop and double-click its Mixxa***.toe. After using it, click the Save button at the bottom of the Mixxa interface to keep your revisions for the next time you restart Mixxa***.toe.

Mixxa is designed to work with an external monitor (up to 3 actually) or projector. If you have one, plug it in before running Mixxa. Generally, Mixxa likes to work with your second monitor acting as an extended desktop. Once you have your monitor set up as your extended desktop, start Mixxa. If all is working properly, you'll see the interface screen on your main monitor and the output on your secondary monitor. Even if you don't, this next step will set up a smaller preview of the output... 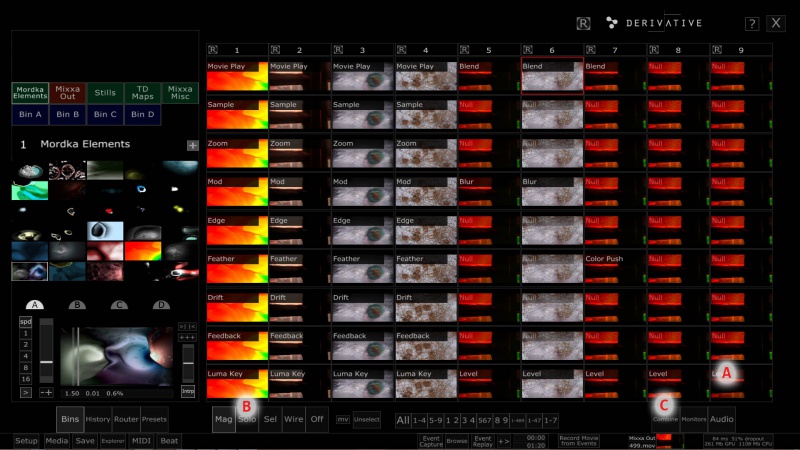 First, click on the word “Level” (A) in the bottom-right cell of the grid of cells (the Matrix). Next, press the button that says Solo (B) in the row of view buttons. You will now see a preview of the output in the center of the interface. If you don't have a second monitor, the video you see there is exactly what you would see on that screen.

Finally, press the Combine button (C) in the bottom-right row of buttons. This brings up the main video mixing interface. Your screen should now look like this... 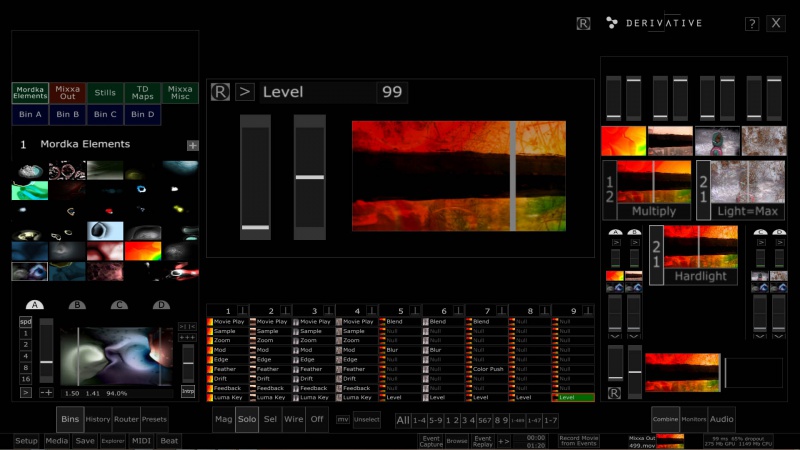 You're ready to start mixing! 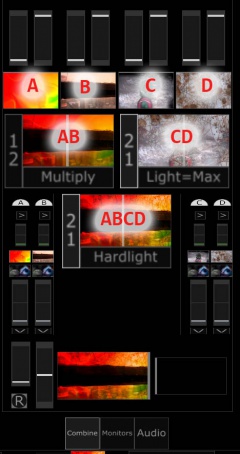 What you are looking at is just one way of blending C and D together. Press the button that says Light = Max under the CD mixer. A new “Blends” window opens up that lets you select from the various blending modes. Mousing over the various blend types lets you preview them in the Blends window. Clicking on a type will select it and you will see the results in the output. Experiment a little bit and you will see that there are a great many interesting ways to mix the two images together. 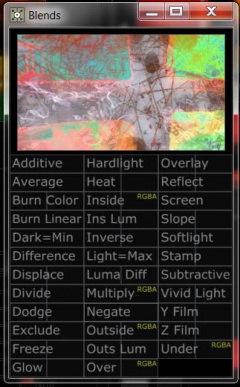 You've probably already noticed that the AB and ABCD combiners also have Blend type buttons. With what you already know, you can create a huge number of variations on the output image that we started with. However, things get really interesting when you start changing the 4 input signals, so let's move on to that.

The Bins panel, on the left, is where you select new video and still signals. You can click on the small icons to preview the video in the display below the Bins. When you find a video that you want to use, you can click that video and drag to the right. You will see a popup (A) showing the letters of the channels, ABCD, next to the current image assigned to that channel. Release the mouse over the channel you want to assign the image to. 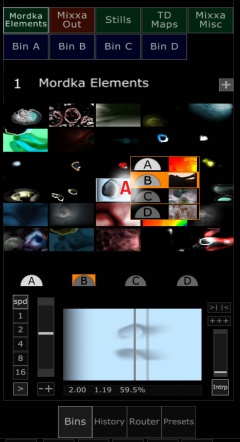 The image icons that you are choosing from right now are from the Bin (a group of images) called Mordka Elements. You can select a new bin using the buttons at the top of the Bins panel. The green buttons show special Mixxa bins. You can click on those to see some new image choices. Clicking on one of the blue user Bins will bring up instructions for adding your own videos or images to that bin. Go ahead and add an image or video from your computer if you have something. Not every movie or image will work with Mixxa... the most reliable are .mov movies and .jpg stills. Other formats that mostly work are .avi, .mpg, .mpeg, and the occasional .swf file.

Now you know how to change the inputs around and load your own movies. Perhaps it's a good time to pick some new inputs and use the Combine panel to mix them together into something beautiful and/or mind-blowing. Or perhaps you'd like to plow straight through into changing your input images using effects.

Effects that you put on images in Mixxa are added to the Matrix, which is the grid of image cells in the center of the interface. For this part of the tutorial, set the view mode to Mag mode by clicking the Mag button under the grid. In general, clicking on the word in a cell selects and expands just that cell, while clicking on the image in a cell selects and expands that cell in addition to whatever else is selected. Try this out by clicking on a few cells just to see how that works. Now click the Unselect button under the grid so we can start clean. 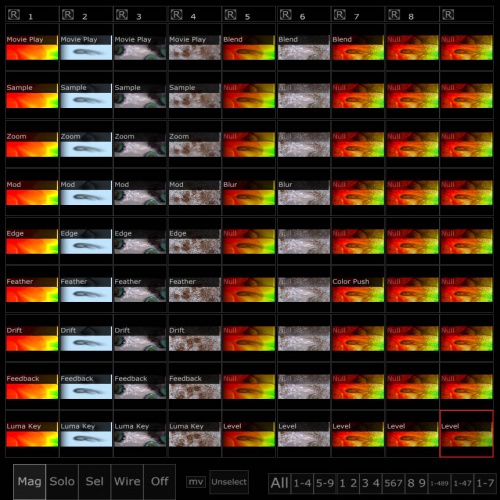 You will notice that columns 1, 2, 3, and 4 contain the four input channels that go in to the Combine panel you were mixing with earlier. Column 5 of the Matrix contains the AB mix, Column 6 contains the CD mix, and Column 7 contains the ABCD mix. All of this can be rearranged and rewired, but that is beyond the scope of this tutorial, and this starting setup will serve most of your video mixing needs.

In general, images in the Matrix are processed from top to bottom. The top cell in a column is usually the raw input image... a video or still (column 1-4) or a mix of columns (column 5, 6, 7). From there, the image is altered by effects in each cell of rows 2-9 as it travels down the columns. One of the great things about Mixxa is that you can see the results as the image travels down a column.

We're going to start by messing with the Zoom in column 1. To expand the cell, click on the word Zoom in the third box down in column 1. Be sure to click on the word, because clicking in other places has different effects. The Zoom effect does just what you would expect, it zooms in or out on the image, as well as a few other cool things. When you expand the Zoom cell, you will see a bunch of controls surrounding the image. Often, effects in Mixxa also have controls that are operated by clicking in the image itself. For this example we are going to do just that... click in the image and drag to the left. You moved the center point of the image. Move it over towards the left, centering the mirror point. If you want to turn off the mirroring, just click the "Mirr" button. Notice that the change that you made is reflected in all the cells below the Zoom cell in this column of the Matrix. 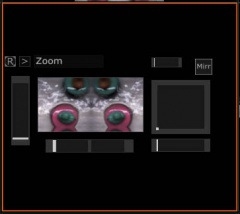 Most of the controls in an effect cell are specific to the effect, but there are a couple important buttons in the upper left that are in every effect. The “>” button bypasses the effect so you can turn it on and off at will. Try it. When you bypass the effect, you'll still see it applied in the expanded cell you're in, but notice that the cells below it revert to how they were without the Zoom. This lets you create effects before you apply them and also lets you remove an effect while maintaining whatever setup you've created in the effect controls. The other button in the upper left, the “R” button, reverts the control to its default settings. Notice there is an “R” button in the top of each column, which reverts all cells in the column to their defaults. There is also an “R” button at the top of the screen that reverts all cells in the Matrix to their defaults.

The Matrix starts with many effects set up in the cells, but all of those can be swapped out for other effects. Let's add a new effect to the same image that you changed the Zoom on. Two cells below Zoom, you'll see a cell with the Edge effect. Click on the word Edge to expand that cell. Then right-click on the word edge to bring up an effect menu. Select “Replace Cell” from that menu to put a new effect in. A menu will come up that lets you choose a new effect for the cell. 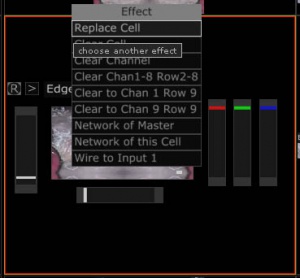 Select “Fizzle”. The cell changes to a Fizzle effect with the appropriate controls. Drag in the image itself to add some fizzle. This is a very simple effect for the sake of example. As you saw, there are many to choose from... go to Mixxa2015 Effects for information about the different effects. Obviously, experimentation is a great way to learn about the effects as well. 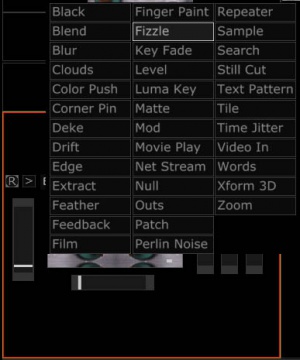 You've already learned enough to make some very cool art with Mixxa. This final section will explain how to save what you've done for future use in Mixxa or other video programs. Before saving, you may want to create a mix that you really like. Remember that in the initial configuration, the output of Mixxa is the bottom-right cell in the Matrix.

Exporting a .mov file from Mixxa couldn't be easier. On the bottom-right of the Mixxa interface there is a box that says “Mixxa Out” and has a small version of the Mixxa output. To begin recording, simply click in the output image thumbnail. To stop recording, click again. A .mov file is saved in the MixxaOut folder inside your Mixxa folder.

The settings in your Matrix can be saved for use in later Mixxa sessions by saving a “Preset”. To do this, click Presets in the lower left row of buttons in the interface. This replaces your Bin view with the Presets view. To save your current settings, simply click the New button. Later, you can bring this Preset back by clicking on the Preset icon that just appeared, then the Restore button. To update an existing Preset, you simply select the Preset in the preview icons, then press the Snapshot button.

Once you've saved a Preset, you still have to save your current Mixxa session. If you don't save your Mixxa session, your Presets will be lost. To save the session, just click Save in the lower-left row of buttons in the interface. Mixxa will create an automatically incremented .toe file in your Mixxa folder. Next time you run Mixxa, you can simply run that .toe file to restore the current setup. Running the non-numbered version of Mixxa will always run the latest .toe file in the Mixxa folder.

Now that you know the basics, explore Mixxa by experimentation and/or by checking out the other documentation. As mentioned above, you can see the basic docs here.