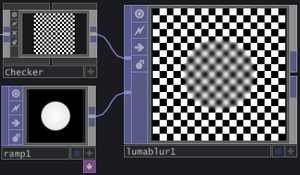 The Luma Blur TOP blurs image on a per-pixel basis depending on the luminance or greyscale value of its second input.

Kernel Width Channel widthchan - ⊞ - The greyscale can be any channel of the second input, or composites like luminance and RGB average.

Black Filter Width blackwidth - The amount of blur where the second input is black.

White Filter Width whitewidth - The amount of blur where the second input is white.

Extend extend - ⊞ - Sets the extend conditions to determine what happens to the blur at the edge of the image.

Resolution resolution - ⊞ - Enabled only when the Resolution parameter is set to Custom Resolution. Some Generators like Constant and Ramp do not use inputs and only use this field to determine their size. The drop down menu on the right provides some commonly used resolutions.

Use Global Res Multiplier resmult - Uses the Global Resolution Multiplier found in Edit>Preferences>TOPs. This multiplies all the TOPs resolutions by the set amount. This is handy when working on computers with different hardware specifications. If a project is designed on a desktop workstation with lots of graphics memory, a user on a laptop with only 64MB VRAM can set the Global Resolution Multiplier to a value of half or quarter so it runs at an acceptable speed. By checking this checkbox on, this TOP is affected by the global multiplier.

Aspect aspect - ⊞ - Use when Output Aspect parameter is set to Custom Aspect.

Input Smoothness inputfiltertype - ⊞ - This controls pixel filtering on the input image of the TOP.

Fill Viewer fillmode - ⊞ - Determine how the TOP image is displayed in the viewer.

NOTE:To get an understanding of how TOPs work with images, you will want to set this to Native Resolution as you lay down TOPs when starting out. This will let you see what is actually happening without any automatic viewer resizing.

Passes npasses - Duplicates the operation of the TOP the specified number of times. Making this larger than 1 is essentially the same as taking the output from each pass, and passing it into the first input of the node and repeating the process. Other inputs and parameters remain the same for each pass.

Channel Mask chanmask - Allows you to choose which channels (R, G, B, or A) the TOP will operate on. All channels are selected by default.

Pixel Format format - ⊞ - Format used to store data for each channel in the image (ie. R, G, B, and A). Refer to Pixel Formats for more information.

Extra Information for the Luma Blur TOP can be accessed via an Info CHOP.

A CHOP outputs one or more channels, where a channel is simply a sequence of numbers (Samples), representing motion, audio, etc. Channels are passed between CHOPs in TouchDesigner networks. Channels can be Exported to Parameters.

Operators that need 1 or more inputs are called Filters in TouchDesigner, like a Math CHOP. See Generator.

The width and height of an image in pixels. Most TOPs, like the Movie File In TOP can set the image resolution. See Aspect Ratio for the width/height ratio of an image, taking into account non-square pixels.

The viewer of a node can be (1) the interior of a node (the Node Viewer), (2) a floating window (RMB->View... on node), or (3) a Pane that graphically shows the results of an operator.

An Operator Family which operate on Channels (a sequence of numbers (Samples)) which are used for animation, audio, mathematics, simulation, logic, UI construction, and data streamed from/to devices and protocols.