What is Hardware Frame Lock?[edit]

There are two parts that make up Hardware Frame Lock.

Genlock ensures the refresh intervals of all the displays are occuring at the same time (in phase with each other). The sync signal can be generated internally by one of the Quadros in the sync group, or by an external House-Sync signal plugged into the Quadro Sync cards. Without Genlock the displays may be refreshing at different intervals, resulting in visual tearing due to some displays starting to update their content before other displays. Genlock is obtained by setting up the Quadro Sync in the Nvidia Control Panel. It will function regardless of how the TouchDesigner project is setup (as long as V-Sync is on), and doesn't require a Pro license.

Frame Lock is enabled in the Window COMP. This feature also uses the Quadro Sync cards, and ensures all of the displays only update when they are all ready to update. This avoids cases where one process has a hiccup and isn't ready to output a new frame, but other processes go ahead and update anyways, resulting in the final canvas showing two different frames at the same time. All processes will stall and wait for the lagging process when a hiccup occurs. This mode also reduces overall render performance due to the overhead it requires, so it should only be used when absolutely nesseary. Lots of content can be shown across multiple displays without Frame Lock, and look great.

The Nvidia Quadro Sync hardware solution requires the use of specific Quadro cards with the appropriate Quadro Sync card for synchronization. Each computer system that will be synced requires its own sync card which is attached to the graphics card via a ribbon cable.

Multiple GPUs on a Single System[edit]

This is the most simple setup which will synchronize the output of multiple GPUs and displays on a single computer.

1) Make sure all connections and power are properly setup between the graphics cards and sync card.

2) Make sure Vertical Sync setting in the Nvidia Control Panel is set to "On" or "Use the 3D application setting". 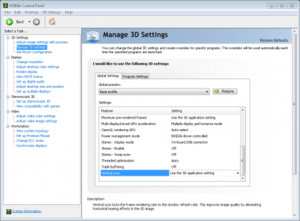 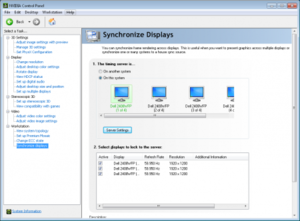 4) In your TouchDesigner .toe file, confirm the following:

At this time we do not have any field testing with the ATI FirePro hardware solution. Please refer to AMD/ATI support for details of this system.