Floating cloud licenses offer a simple solution for those looking to have a pool of licenses available to any of their team, world-wide. A pool of numerous licenses on one account can be shared between global locations such as offices, studios, or installations, delivering the license to the team member on demand wherever they have an internet connection. This is different from the Dongle based floating licensing, since that solution requires the Dongle and the local computers to be on the same LAN.

Lab Computers at Schools and Universities[edit]

A great usage case for floating cloud licenses is to make it easy to license TouchDesigner and TouchPlayer when running it on servers in the cloud. Often these virtual cloud servers do not have consistent system codes. This may be because a new instance is spun-up every time the cloud server is launched, or it may be because the way the cloud platform works causes the system code to change often. Dongle-based solutions also don't work since it's rare that access to the hardware is possible for cloud servers.

Any existing license can be converted to a Floating Cloud License simply by paying the difference in price between the standard license and the floating license price. There is no store item to do this, so you can purchase the equivalent amount using "Payment Tokens" on the store, and contacting us at sales@derivative.ca to have your license converted over. Note that the conversion does not change the update date on the license.

A single user account can have any number of licenses assigned to be floating in the cloud and any type of license can be used ie. Educational - Commercial - Pro. This service is accessed using a credential file which is a .wbc file that Derivative will give to you. On any computer where you want to acquire a license from the cloud, this .wbc needs to be loaded into the CodeMeter Control Center. When TouchDesigner or TouchPlayer launches, if a .wbc file is installed on the system, it will attempt to acquire a license available from the cloud service. If any local licenses that are installed are higher (ie. Pro is higher than Commercial), those will be used as well ontop of the cloud license. If you don't want to use a cloud license anymore on a computer, you can simply remove the credentials from the CodeMeter Control center by clicking the 'Remove' button in the UI.

Unlike hardware Dongle licenses, which are checked for the appearance/disappearance of licenses every 20 seconds, floating cloud licenses are only checked once on startup. This is due to limits on how many requests we can do to the CodeMeter servers. Because of this limit if your account does not have any available licenses when TouchDesigner start, you will need to restart TouchDesigner to acquire a license when one becomes available.

Currently removing a CmCloud license from a computer takes a few steps. We are hoping CodeMeter will release a better solution soon. In the meantime the CmCloud license can be removed using one of two ways.

On macOS the command is simply called cmu.

Enable the 'Remove' button in the CodeMeter Control Panel UI[edit]

1. Open registry editor by clicking the Windows symbols and type: regedit
2. Create a new DWORD(32-bit) Value at HKEY_CURRENT_USER/SOFTWARE/WIBU-SYSTEMS/CodeMeterCC with the name "AllowCmActDelete" and set entry to a value of 1.
3. Restart the computer.
In order to deactivate the button follow step 1 and set "AllowCmActDelete" to a value of 0 or delete the complete string entry.

Releasing a license that is stuck as in-use[edit] 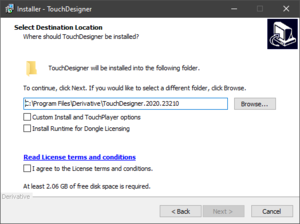 NOTE: Both version 6.80 and the latest version 7.10 do not connect to dongles in some cases. We recommend using version 7.0 linked to above.