The Audio Dynamics CHOP is designed to control the dynamic range of an audio signal. Dynamic range refers to how loud and quiet the audio is over some period of time. The Operator contains two types of dynamic control: compression and limiting. It is recommended that you link this CHOP to an Info CHOP, so that you can have some visual feedback: The amount of compression or limiting which is being applied will be displayed in the Info CHOP.

Compressor The goal of a compressor is to reduce the amplitude of a signal when it crosses a certain threshold, while introducing little to no harmonic distortion. The desired threshold is set by the user, and the amount of compression to be applied is determined by the compression ratio. The attack and release parameters determine how quickly the compression will be applied and released, as incoming signal goes above and below the threshold.

Limiter The purpose of a limiter is to ensure a signal is within a certain dynamic range, while introducing as little harmonic distortion as possible. Unlike the compressor, the goal is not to apply a smooth or musical form of dynamic control, but instead to keep the signal within a 'safe' range that is compatible with any CHOPS that are downstream (for example, an Audio Device Out). This means that the Limiter has a much more abrupt (instant) attack value, which cannot be adjusted by the user.

Input 2: Side Chain Channels - Other audio channels coming in can be used to determine the gains that are applied to the audio channels of the first input.

NOTE: This is a useful article for procedurally mixing audio for games.

Input Gain (dB) inputgain - This parameter controls the volume of the channel before it reaches the compressor. If the signal to be compressed is not in a useful dynamic range, this parameter can be used to repair it.

Enable Compressor enablecompressor - Turns the compressor on or off.

Threshold (dB) thresholdcompressor - This parameter sets the threshold value which a signal must cross before compression is applied. It uses a decibel scale, where '0 decibels' would be considered the loudest possible signal*, and '-60 decibels' would be nearly inaudible. This is assuming that input signals are normalized to a "-1 to +1" range.

Knee kneecompressor - The knee defines how the CHOP will transition into compression as signals approach or cross the threshold. With a knee of '0' (a hard knee), think of the compressor as applying a flat compression response, where: compression_gain(db) = amount_that_signal_has_crossed_threshold(dB) * compression_ratio This type of compression is not always desirable, as it can have a strong effect upon the dynamics of a sound. Increasing the knee parameter will cause there to be a smoothed transition into the compression. See the Knee diagram below. 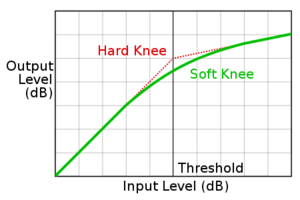 Release (msec=10**val) releasecompressor - The release will control how quickly the compressor responds when a signal drops to a lower level, or goes below the threshold altogether. Just like the attack, higher value will slow down the response, but too high of a value will be too slow.

Output Gain (dB) gaincompressor - After applying compression, the signal can be reduced with Gain to a lower volume level. To make up the lost volume, this parameter can be increased.

Enable Limiter enablelimiter - Turns the limiter on or off.

Threshold (dB) thresholdlimiter - This is the threshold value which a signal must cross before limiting is applied. Usually, this value should be left at '0' decibels. Just like the compressor, a value of '0' decibels is considered to be the loudest possible signal. From the perspective of digital audio, a signal level which varies between "+1 <-> -1" is at a volume level of "0" decibels, because it is not possible for a digital system to respresent any values larger than "+1 <-> -1". Instead, they will simply be clipped as they proceed to the output device. The limiter allows you to stop your audio from being clipped if you exceed this range, and applies a much smoother form of fast compression, which is barely audible. Lowering the threshold value will cause the output to be clamped to a lower level.

Release (msec=10**val) releaselimiter - Although the attack of a limiter is always quick, the release can still be set by the user. This will determine how long the limiter takes to transition out of a limiting situation. Increasing the release will help smooth out the effect of the limiter. Too high of a value may cause the limiter to release too slowly. For example, after an excessively loud tone burst, the limiter's gain may have been pushed up to an extreme value. This extreme value will take a long time to be fully released.

Each channel can be different by putting expressions with the channel index, me.channelIndex in parameters like the frequency channel.

Knee kneelimiter - Similar to the compressor, this parameter controls how the CHOP will transition into limiting, when a signal becomes louder. A larger knee will mean a smoother transition. See the Knee diagram above. If set to '0', no limiting will be applied until a signal goes over the threshold value. When increasing the knee parameter, some limiting will be applied before a signal goes beyond the threshold value, in an attempt to smooth out the effects of limiting overall.

Dry / Wet Mix drywet - As this parameter is reduced from 1 (Wet) toward 0 (Dry), it removes the effect of the filter.